The night shelter in Somerset West, which has existed at the same address on Church Street for 30 years according to social worker Nicolene Andries, has in the past five years taken significant strides towards becoming better known to the community as well as more effective in its mission.

This can partly be ascribed to the partnership between the shelter and the Somerset West City Improvement District.

The shelter’s approach in recent times has been to ‘go big’ with stakeholders, role players and partners, says Nicolene. In the past one of the biggest drawbacks had been the fact that the community of Somerset West was largely uninformed or unaware of the shelter and its activities. “Since I became involved five years ago, the interest and involvement has however grown daily,” she says.

One of the main advantages of the partnership between the SWCID and the Shelter is the job creation programme which not only offers hope to the shelter’s clients, but also holds a benefit for the community in the sense that Main Road gets tidied up and cleaned.

Gene Lohrentz of Geocentric says the partnership with the shelter is based on Geocentric’s Social Work Action Team concept. He says the principle is threefold: 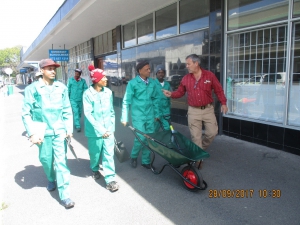 Nicolene confirmed that regular training or mentoring sessions were being planned, to ensure a better mutual understanding between the shelter’s clients and the CID patrol officers.

(Read more about the shelter on the website www.swnightshelter.org.za )