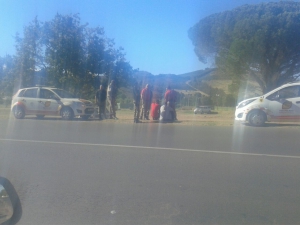 This morning’s chain of events was certainly not what 4 burglars from Cape Town had planned for their day! All praise goes to observant Somerset West CID Public Safety Officers who noticed a car being broken into in Libri Lane, Somerset West around 8:20 this morning.

They radio’ed through to our Operations Centre for backup who dispatched our Armed Response Teams in full force.

The burglars immediately scattered with our team hot on their heels. It didn’t take Armed Response Supervisors Levitt and Fredericks and Officers Visser, Fielies, Greeff and Swartz long to apprehend all four burglars!

Two were caught in Bright Street and two near Radloff Park.

Congratulations to all involved – this certainly showed excellent team work between our Somerset West CID Public Safety Officers, Armed Response Team and Operations Centre! Also hoping the message will be put out there to encourage burglars to be doing their shopping elsewhere!

A quote from a witness ” SAPS & Secure Rite were brilliant they never stopped. Amazing Work”.

From the owner of the car  “a big thank you to all the Secure Rite officials that were involved in capturing the thieves that tried to steal my car at Libri Lane SW. I can’t explain how much easiness comes to mind when security companies respond that quick. Once again from myself & my family thank you very much”.

Want to join the discussion?
Feel free to contribute!